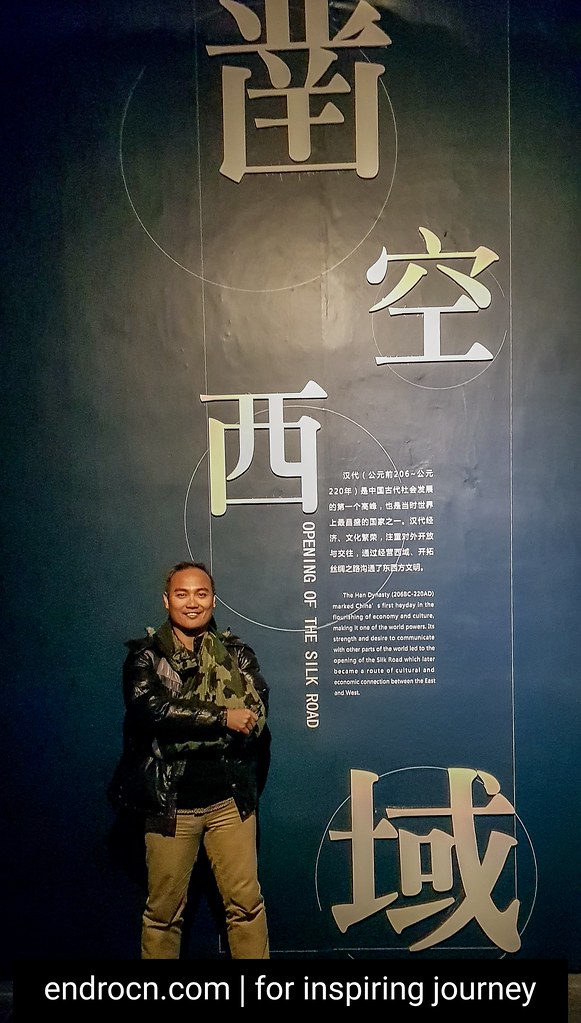 Glad to be back to Xi’an!

Rather than going to Xi’an typical touristic spots (the Terra cotta Warriors, the City Wall, the Muslim Street and so on; I went there but you can ask google for more), I chose to end the first leg of my #SilkRoute trip at Shaanxi Provincial History Museum where the “Silk Road Legacy Radiating from Chang’an” exhibition was held until end of January 2018 (how lucky I am!).

The exhibition took me back to where the route was started during Han Dynasty in 138 BC. Zhang Qian was dispatched by the Han Emperor to explore and build a trade route towards west of Chang’an (Xi’an today). Continued by the introduction of Buddhism to China through this route, Xuan Zang travelled to India to learn and copy the then popular religion’s scripture. At that time, Silk Route was no longer trade route only; it became a historical route of humanity where new cities, kingdoms and cultures fell, emerged and revived.

The most interesting part of this exhibition was, however, the revival – and redefinition – of the New Silk Road by the Chinese government. Google “One Belt, One Road” or OBOR, and you’ll understand. At OBOR Summit last year, President Xi Jinping mentioned that the new Silk Road would not only become trade, but also cultural, spiritual as well as a social belt, linking not only Asia and Europe but Middle East and Africa.

I remember how locals in Luang Prabang, Laos were happy to have a new railway linking their city to Chinese southern cities. Or locals in Tehran, Iran were excited about several infrastructure projects sponsored by the Chinese government. A new friend from Punjab, India was, however, smelled something fishy about the new highway road built to link China and the central Asian countries. The new Silk Road was, indeed, as ambitious as – if not more than – what Han Emperor could imagine.

The exhibition nicely wrapped up this first leg of my #SilkRoute trip, both geographically and philosophically. With a new understanding about #SilkRoute, I’m looking forward to return to Indonesia.