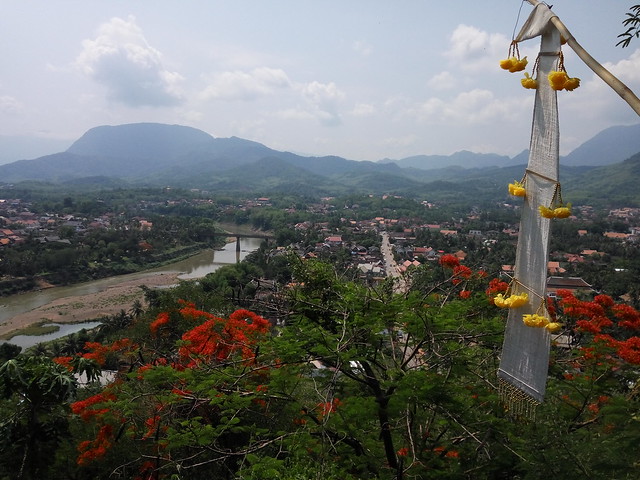 “Friendship is the marriage of souls, and this marriage is subject to divorce.”

Today, I finally purchased my return ticket to Indonesia. After spending some time with my new monk friends in their Wat Mai monastery, the question why I picked Luang Prabang and purchased a one-way ticket for this trip was (hopefully) revealed; although it was actually revealed the day I arrived in this city.

As soon as I reached my guesthouse, a 36 year old French traveler, who would be my roommate, warmly welcomed me as if I was his old friend. He then said that he travelled from Chiang Rai to Luang Prabang only to meet me.

“We don’t know each other,” I said to my confusion.

“True. But something kept telling me that I had to travel to Luang Prabang, because the person that I needed to talk to would be here. And, particularly, because that person had with him this book,” he said, pointing at my ‘travel’ book of Portable Voltaire.

“What’s wrong with this book and what did you want to talk to me about? Who are you?” I was curious.

“Turn to page 128. Read the first section,” he instructed me.

“Friendship is the marriage of souls, and this marriage is subject to divorce. It is a tacit contract between two sensitive and virtuous persons. I say sensitive, because a monk, a recluse, can be innocent of evil and still live without knowing the meaning of friendship. I say virtuous, because the wicked have only accomplices; voluptuaries have companions in debauch, self-seekers have partners, politicians have attachments; princes have courtiers; while virtuous men alone have friends. Carthegus was the accomplice of Catiline, and Maecenas the courtier of Octavius; but Cicero was the friend of Atticus.”
Portable Voltaire, Ben Ray Redman (1949)

“Aren’t you feeling like a bit slipping away from many of your relationships now?” he probed.

“What kind of relationships? If it’s romantic l, I don’t…”

With his soft voice and gloomy eyes, he then shared how he could never pay off what he owed to his late friend who died two years ago.That was until he realized his friend gave him the same book to the one I had – quite an old book I got from flea market in Blok M area. He showed me a message from his friend, written in page 128 of his book.

“We were brothers. We were lovers. We were family. But most importantly, we were friends. If we ever ‘divorced’ please let go the others but not the friends. I love you my friend. Please share the same love I got from you to people who needs them.”

And that’s what he did, changing his original plan, from Chiang Mai to Yangon, veering off to Luang Prabang. Only to meet me. I didn’t believe. I couldn’t believe. I still don’t believe until today.

The morning after, he said goodbye to me and kindly asked me, more like pleading, to do the same. “Help me pay my dues to my late friend. I know you are not in a better situation with some of your friends right now. I know they are precious to you but lately you’ve been thinking that you’re failing them,” his voice was so soft that I had to read his lips.

“You’re not failing them. Like marriage, true friendships have ups and downs. If this is your down, that’s probably why we meet here. Let your friends know that you care about them and you will try your best not to ‘divorce’ with them,” with that he held my hands and left with his tuk tuk.

I did what he asked, sending similar messages to those friends I thought I have or almost failed. If you read this and have received my message, I want to let you know that the moment, the experience and the connection you have with me may last someday, but I am willing to make effort to make it last longer.